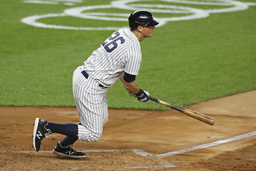 NEW YORK (AP) The New York Yankees and AL batting champion DJ LeMahieu worked Friday to put in place a six-year contract worth about $90 million, a person familiar with the deal told The Associated Press.

The person spoke on condition of anonymity because the agreement is subject to a successful physical.

LeMahieu, who turns 33 in July, became the first player to win undisputed batting titles in both leagues. He won his first AL batting title last year ,at .364, the highest average for an AL batting champion since Minnesota's Joe Mauer hit .365 in 2009, after winning the NL championship with Colorado in 2016.

LeMahieu started his big league career with the Chicago Cubs in 2011, then was traded to Colorado. He has a .305 average with 85 homers and 478 RBIs in 10 big league seasons, and he has won three Gold Gloves at second base.