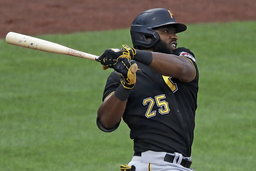 Gregory Polanco doesn't linger over his long-term future. There's too much to focus on in the present, namely kick-starting a career that's been stuck in neutral for more than two years.

The Pittsburgh Pirates right fielder is only too aware that he has struggled to live up to a $35 million, five-year contract that runs though this season, Injuries - some of them freakish - and extended slumps have turned a deal that looked like a potential bargain a half-decade ago into a bit of an albatross for a club in the midst of a top-to-bottom makeover.

The Pirates spent a portion of the offseason flipping their most established players - first baseman Josh Bell and pitcher Jameson Taillon among others - for prospects in hopes of restocking the farm system. The main reason Polanco didn't follow them out of town? Turns out there isn't much of a market for a player scheduled to make $11 million this year and who has hit just .197 with 13 homers combined over the last two seasons.

''Obviously, I miss my guys,'' Polanco said Thursday. ''I've been around (Taillon) and JB for 10 years, so, you know, it's tough. But, that's baseball. I wish the best for them, but we are here now, just working and happy to be back.''

Polanco's talent has never been in doubt. He made his debut in 2014 and spent his first two seasons as part of what the Pirates called the ''Dream Outfield'' alongside perennial All-Star Andrew McCutchen and Starling Marte.

The dream - and the run of three straight playoff appearances from 2013-15 - is over. McCutchen and Marte and everyone else associated with Pittsburgh's mini-renaissance are gone. Polanco remains, confident that his best baseball remains ahead of him no matter how rough the last two years have been.

An awkward slide in September 2018 and the shoulder and leg problems that followed cost him most of 2019. Last spring he looked ready to regain the form that saw him hit a career-best 23 home runs in 2018 before getting hurt. Then the COVID-19 pandemic shuttered things for four months and when he went back to work in July, he wasn't the same.

Polanco hit just .153 with seven home runs in 50 games. He started 0 for 9 and never really recovered, his average never rising higher than .167. He admits the slow start led to him pressing, the truncated 60-game season making it feel like the walls were closing in quickly.

''Every season that I've played in the majors, like, everywhere, you've got your slump for weeks, months, whatever,'' he said. ''But we didn't have the time last year. You know, we only had two months, and at the end of the season, when I started feeling better, swinging better, but we didn't have enough time.''

He headed home to the Dominican Republic, playing in the winter league there for a month before getting shut down with what was originally called a fractured wrist, though Polanco says it was a ''flare'' that was no big deal.

''I'm not working too much on my mechanics because I've never been that guy,'' Polanco said. ''Just trying to see it and keep it as simple.''

Easier said than done when you're 6-foot-5 and 235 pounds. Polanco's swing always been a bit of a puzzle. Former Pirates manager Clint Hurdle described it as a series of levers that can take a while to work in concert with each other. When they do, Polanco can be the foundation of a lineup in need of power. When they don't, it's a mystery difficult to solve, on his teammates believe Polanco can find the answer to as long as he can stay out of the trainer's room and on the field.

''He looks good and healthy and that's all you can ask, is to be healthy,'' left fielder Bryan Reynolds said. ''Then his talent will take over.''