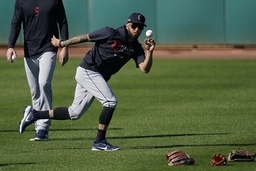 Cleveland Indians outfielder Eddie Rosario reaches out to catch a baseball during a spring training baseball practice Monday, Feb. 22, 2021, in Goodyear, Ariz. Once adversaries, Eddie Rosario and Indians manager Terry Francona are now allies. So when Rosario, who spent the past six seasons with Minnesota, sat down with Francona at spring training camp in Arizona for the first time last week, the free-swinging outfielder received a warm, if not awkward, welcome.(AP Photo/Ross D. Franklin)

So when Rosario, who spent the past six seasons hammering Cleveland pitchers while in Minnesota, sat down with Francona at spring training camp in Arizona for the first time last week, the free-swinging outfielder received a warm, if not awkward, welcome.

''I told him it is so nice not to hate you anymore,'' Francona cracked.

Smashing eye-level pitches out of the strike zone and ones just inches above his cleats, Rosario tormented the Indians while with the Twins. He batted .353 with 11 homers, 12 doubles and three triples - his most in any ballpark - in games at Progressive Field, his new home.

A free agent this winter, the 29-year-old Rosario signed a one-year, $8 million contract with the Indians in December, joining a team he battled regularly and one desperate to fill a power void in its lineup following the departures of All-Star shortstop Francisco Lindor and slugger Carlos Santana.

Francona no longer has to tense up every time he sees Rosario stroll toward the batter's box.

''He just seemed to wreak havoc,'' Francona said. ''And now go ahead and wreak it all you want. We'll cheer for you and pat you on the back. We got a good laugh out of that. He seems like a really good kid. He seems excited to be here.''

Rosario is genuinely thrilled to be joining the Indians, who finished one games behind Minnesota last year in the AL Central.

It's a new start, but also a familiar one.

''I played a lot against this club,'' Rosario said. ''I love playing at Progressive Field in Cleveland. I love the stadium and I hit it well. I see the ball really good. I like the team, too. I have a couple of friends here. I feel happy to be here.''

After the Twins decided not to re-sign Rosario, who hit 13 homers in 57 games last season and 32 in 2019, he began looking for a team that fit his needs. He wanted to play for a contender and with like-minded players. The Indians checked both those boxes.

''I think for me it was more like looking for a family,'' Rosario said. ''People that I am familiar with; people that have seen me play. Tito has seen me play for a couple of years, playing against me while I was in Minnesota. I have a couple of fellow countrymen from Puerto Rico on this team so this is a great opportunity for me.

''I was looking for a place where I felt comfortable playing, a ballpark I know, a place where I can have my best game and I felt the Indians were the best match for me.''

Rosario can play both corner outfield spots, but he's spent more time in left and that's where Francona intends to play him. While he may be better known for his offensive prowess, Francona said Rosario is more than adequate defensively.

''He throws fine,'' Francona said. ''I think we've tried to explain to him that as we get to know him, it's not just in the batter's box, it's on the bases and in the outfield. He's such an enthusiastic kid and he's really passionate that I think sometimes his emotions probably - and we've seen that from the other side - but I think he'll be just fine out in left field.''

Rosario just wants to be on the field.

Growing up in Puerto Rico, Rosario dreamed of making it to the big leagues, and once he got there, he fulfilled another childhood fantasy.

With his family in the stands at Target Field in 2015, Rosario homered on the first pitch of his first major league at-bat for the Twins.

''That's my dream when I was a kid,'' he said. ''But I felt ready and strong for this moment. It's also a great moment for me and my family.''

Rosario had another special moment when he homered in his first postseason at-bat.

So, can the Indians expect him to do it again?

NOTES: Francona recently had stitches removed after undergoing surgery for a staph infection in his big toe. He finally took a shower without wearing a boot and is moving better. He's been cleared to use just one crutch and could be walking without one soon. ''As many maladies as I've had, the medical people said I'm actually pretty healthy, which kind of surprised me,'' he said. ... Francona expects the club will receive COVID vaccines when it returns to Cleveland. ... The Indians open exhibition play on Sunday against Cincinnati.