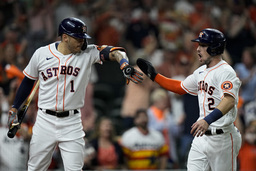 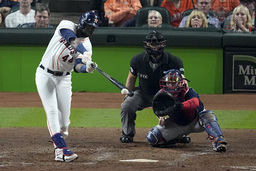 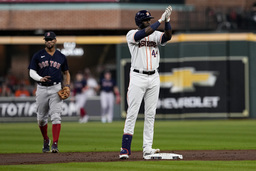 HOUSTON (AP) Two years after winning an AL Rookie of the Year Award, Yordan Alvarez has an AL Championship Series MVP to add to his trophy case.

The 24-year-old Cuban was 4-for-4 with two doubles and a triple for the Houston Astros in Friday night's pennant-winning 5-0 victory over the Boston Red Sox. He drove in the go-ahead run and scored the second.

After missing last year's postseason while recovering from double knee surgery, Alvarez hit an ALCS-record .522 (12 for 23) with one homer, three doubles, the triple and six RBIs in Houston's six-game victory. He scored seven runs against the Red Sox and got nine hits in his last 13 at-bats, raising his postseason average to .441 with two homers and nine RBIs.

''I was just focused on doing the job,'' he said through a translator

Alvarez had a hit every game.

He had an RBI single in the seven-run ninth inning of the Astros' 9-2 win in Game 4, then hit a go-ahead homer off Chris Sale in the second inning the following night and added a two-run, fourth-inning double for a three-run lead as Houston rolled 9-1.

Alvarez doubled in the a run in the first inning Friday night, then tripled in the sixth and alertly sprinted home from third ahead of the throw from Kyle Schwarber, who had turned an unassisted double play on Kyle Tucker's grounder to first.

''He is just that type of player that single-handedly, he can win you a ballgame,'' Boston's Xander Bogaerts said.

Alvarez batted .277 during the season and set career bests with 33 homers and 104 RBIs, both team highs. He became the second-youngest Astros player to reach 100 RBIs behind Cesar Cedeno in 1974 and the youngest to hit 30 home runs.

Quite a turnaround from Alvarez's .241 average with one homer and three durings in the 2019 postseason.

''He hits the ball in the opposite field and it stays straight,'' Astros manager Dusty Baker said. ''It doesn't have a slice on it, and everybody knows he can pull the ball, but he also has power the other way. He is only going to get better. ... And he has worked exceptionally hard to keep his legs together. He had both knees operated on, and we didn't know how much playing he was going to do or if he was going to be able to play the outfield. That's a tribute to him, the fact of how hard he has worked and he has continued to work to keep the strength there.''

Alvarez defected from Cuba in 2016 and signed with the Dodgers for a $2 million bonus, then was traded to the Astros that August for right-hander Josh Fields, who last pitched in 2019 at Triple-A.

He debuted in June 2019 and hit .313 with 27 homers and 78 RBIs in 87 games, earning the top AL rookie honor. But his 2020 season started on the COVID-19-related injured list and ended after two games. He had surgery that Aug. 19 to repair a partially torn right patellar tendon plus a cleanup procedure on his left knee.

Alvarez returned this season and was a bargain at $609,000. At two years, 113 days of service time, he is expected to fall just short of arbitration eligibility this winter, if the rules don't change.