Astros' Valdez to start Game 1 of World Series vs Braves 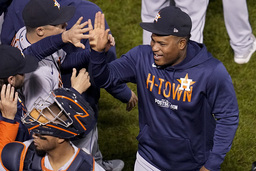 HOUSTON (AP) Framber Valdez will start for the Houston Astros in Game 1 of the World Series against the Atlanta Braves on Tuesday night.

Manager Dusty Baker announced Sunday that Valdez would get the nod, but said the team has not decided on a starter for Wednesday's Game 2.

The left-hander will oppose Charlie Morton, who pitched for Houston from 2017-18, getting the win in Game 7 of the 2017 World Series.

Valdez threw eight terrific innings in a 9-1 win in Game 5 of the AL Championship Series. In Game 1, he permitted three runs in 2 2/3 innings.

The Astros did not provide much new information on the health of ace Lance McCullers Jr., who was left off the ALCS roster because of a flexor pronator muscle strain in his right arm. McCullers still hasn't started throwing, but general manager James Click would not rule out his return.

''We're not taking anything off the table,'' Click said. ''We're going to see how he is. This is the World Series, so it's obviously something that I know that Lance wants to be out there if he can. So we will talk to the doctors and him and the trainers, and we'll figure it out from there.''

Houston will also wait to make a decision on center fielder Jake Meyers, who was on the championship series roster but didn't play while recovering from a shoulder injury. The rookie was injured in the final game of the division series, and Chas McCormick and Jose Siri filled against the Red Sox.

The Astros are also considering their options for how to get the big bat of Yordan Alvarez in the lineup when the series moves to Atlanta for Game 3 and they lose the designated hitter.

After missing last year's postseason while recovering from double knee surgery, Alvarez batted an ALCS-record .522 (12 for 23) with one homer, three doubles, a triple and six RBIs, earning series MVP honors. He scored seven runs in the six games against the Red Sox and went 9 for his last 13, raising his postseason average to .441 with two homers and nine RBIs.

Michael Brantley is Houston's regular left fielder, but Alvarez appeared in 41 games at the position this season and that's where he's likely to play at Atlanta. Brantley would move to right field, shifting Kyle Tucker to center to keep his bat in the lineup.

''Kyle Tucker can play a very good center field, but at the same time, Chas McCormick has been unbelievable in center field and Jake Myers obviously is able to go get it, and I think Jose Siri's one of best athletes out there,'' Click said. ''So it's going to be a balance between offense and defense, and we'll have to figure that out.''