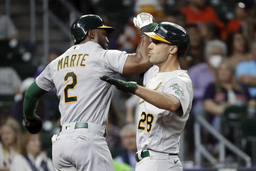 Oakland Athletics' Starling Marte (2) and Matt Olson (28) celebrate after they both scored on the two run home run by Olson during the sixth inning of a baseball game against the Houston Astros Friday, Oct. 1, 2021, in Houston. (AP Photo/Michael Wyke)

Marte's four-year contract is worth $78 million, according to a person familiar with the deal. New York also has agreements in place with Canha, a veteran outfielder who also can play first base, and Escobar, who hit 28 homers this season.

The person spoke to The Associated Press on Saturday on condition of anonymity because the contracts are pending physicals and haven't been announced by the team.

It's the first set of big moves by New York since Billy Eppler took over as general manager, promising on his first day to pursue pricey free agents and create a perennial World Series contender.

The spending spree for Mets owner Steve Cohen also comes after he publicly criticized the representation for pitcher Steven Matz, who has agreed to a $44 million, four-year contract with St. Louis.

Rob Martin, the pitcher's agent, wrote in a text to The Associated Press: ''We handle things the right way and so does Steven.''

New York went 77-85 this season, fading to third in the NL East after a strong start.

The 32-year-old Escobar was a first-time All-Star in 2021, when he batted .253 with 90 RBIs and a .786 OPS for Arizona and Milwaukee. The switch-hitter has been a solid offensive contributor and a steady defender at third base the past four seasons, except for a slump during the pandemic-shortened 2020 season.

Escobar has spent most of his time at third base, but he has experience all over the infield. His versatility could be key for the Mets if they don't bring back free agent Javier Baez.