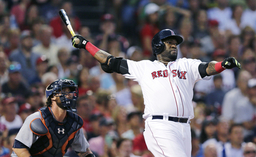 Boston Red Sox designated hitter David Ortiz, right, and Detroit Tigers catcher Jarrod Saltalamacchia watch the flight of Ortiz's three-run home run during the third inning of a baseball game July 26, 2016, at Fenway Park in Boston. Ortiz is on track for induction in Cooperstown this summer, riding the strength of his on- and off-field achievements to overcome stigmas that have stalled or derailed the candidacies of some of his predecessors. (AP Photo/Charles Krupa, File) 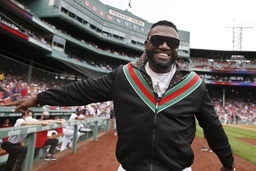 Former Boston Red Sox player David Ortiz walks on the field before a baseball game against the Cleveland Indians, Sept. 5, 2021, in Boston. Ortiz is on track for induction in Cooperstown this summer, riding the strength of his on- and off-field achievements to overcome stigmas that have stalled or derailed the candidacies of some of his predecessors. (AP Photo/Michael Dwyer, File)

The Red Sox slugger looks to be on track for induction in Cooperstown this summer, riding the strength of his on- and off-field achievements to overcome stigmas that have stalled or derailed the candidacies of some of his predecessors.

Namely, Ortiz appears to have bucked anti-designated hitter sentiment that has been blunted by the inductions of Frank Thomas, Edgar Martinez and Harold Baines. And Ortiz's lone reported positive for performance-enhancing drugs - on an expected anonymous 2003 survey test lacking the usual due process - seems to be hurting him less than the more substantial evidence against candidates like Barry Bonds, Roger Clemens and Alex Rodriguez.

Through Friday, Ortiz had been named on 84% of the ballots revealed at the bbhottracker.com website maintained by former Oakland Athletics fan Ryan Thibodeaux and his number-crunching minions. A candidate needs 75% for induction; totals traditionally go down when the final numbers are released.

Clemens and Bonds, all-time greats whose accomplishments are tainted by steroid use, were barely above the threshold in their 10th and final appearance on the baseball writers' ballot.

The Hall will announce the results of the BBWAA vote on Tuesday, and anyone elected to the Class of 2022 will join Gil Hodges, Jim Kaat, Minnie Minoso, Tony Oliva, Bud Fowler and Buck O'Neil, who were elected by the Hall's era committees.

A 10-time All-Star, Ortiz batted .286 with 541 homers and 1,768 RBIs in a career that started with the Twins before they released him to avoid a big payday in arbitration. After arriving in Boston, he finished in the top five of the AL MVP balloting for each the next five seasons; he came in sixth in his final year, 2016, when he batted .315 with 38 homers and 127 RBIs for what may be the best walk-off season in baseball history.

But Ortiz's case is also buttressed by his contributions in big moments, with 23 game-winning hits in his career - three of them during the 2004 postseason, when he helped Boston end its 86-year World Series drought. He led the team to two more titles after that, including 2013, when he helped his ''(expletive) city'' heal after the Boston Marathon bombing and then batted .688 against the Cardinals to win the World Series MVP.

But his outsized personality may also be helping voters to overlook factors that have scuttled others' Hall of Fame candidacies.

Designated hitters received a rough greeting on the ballot until Thomas was elected in 2014 as the first player who spent more time at DH than in the field. Martinez, for whom the top DH award is named, joined him in Cooperstown on his 10th and final try in 2019 after starting just 28% of the time as a position player.

Ortiz has also had to battle suspicions of steroid use, though early balloting shows voters are treating him differently than Bonds and Clemens, who have overwhelming evidence of juicing, or Rodriguez and Manny Ramirez, who tested positive after baseball began full-scale testing in 2003.

Ortiz's only blemish was a reported positive in survey testing that was supposed to be anonymous and used to determine whether to institute regular testing. Ortiz denied using steroids, and Commissioner Rob Manfred said in 2016 ''I think it would be wrong'' to exclude him from the Hall of Fame based on that lone test.

Ortiz is already one of the most beloved athletes in Boston history, with streets named after him both at Fenway Park and outside the Red Sox spring training complex in Fort Myers, Florida. The team has retired his No. 34.

The Hall of Fame could be next.