Harper out again for Phillies with soreness in right elbow 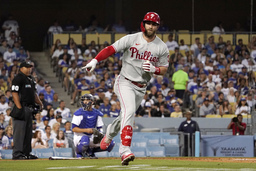 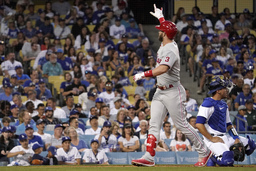 Philadelphia Phillies' Bryce Harper, left, gestures toward the crowd after hitting a three-run home run as Los Angeles Dodgers catcher Austin Barnes kneels at the plate during the third inning of a baseball game Saturday, May 14, 2022, in Los Angeles. (AP Photo/Mark J. Terrill)

PHILADELPHIA (AP) Phillies slugger Bryce Harper did not start a fourth straight game on Thursday as he recovers from a platelet-rich plasma injection in his right elbow.

Harper had said he hoped to play in at least one of the three games against the Padres. But he still experienced soreness from Sunday's injection and was not in the lineup against the Padres. Manager Joe Girardi said he would ''keep our fingers crossed'' Harper could play Friday against Los Angeles.

The reigning NL MVP, Harper had the injection Sunday because of a small tear in the ulnar collateral ligament of his throwing elbow that's forced him into the role of designated hitter. He hasn't played right field since April 16 and will remain as DH whenever he returns. He is unable to throw for at least six weeks.