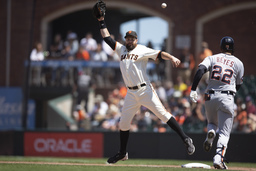 San Francisco Giants first baseman Brandon Belt (9) cannot get a glove on an errant throw that allowed Detroit Tigers' Victor Reyes (22) to reach first during the seventh inning of a baseball game Wednesday, June 29, 2022, in San Francisco. Reyes was credited with a single, and advanced to second on the throwing error. (AP Photo/D. Ross Cameron) 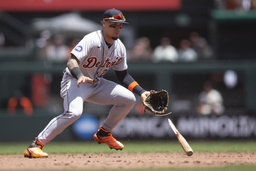 Detroit Tigers shortstop Javier Bez (28) tries to avoid the barrel of San Francisco Giants' Evan Longoria's broken bat while also fielding his ground ball during the third inning of a baseball game, Wednesday, June 29, 2022, in San Francisco. Bez was unable to make a play and Longoria was credited with a hit. (AP Photo/D. Ross Cameron) 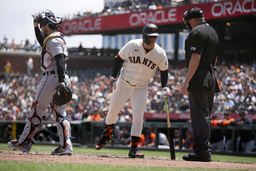 San Francisco Giants' Joc Pederson, center, has words with home plate umpire Lance Barrett after being called out on strikes during the third inning of a baseball game against the Detroit Tigers, Wednesday, June 29, 2022, in San Francisco. (AP Photo/D. Ross Cameron) 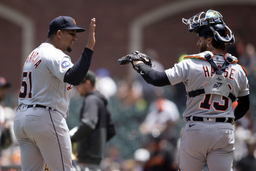 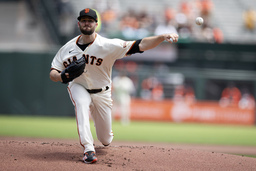 SAN FRANCISCO (AP) Eric Haase hit a two-run homer to break a 1-all tie in the sixth inning and the Detroit Tigers held on to beat the San Francisco Giants 3-2 on Wednesday.

It was Haase's fifth home run of the season and his second in the last three games. Miguel Cabrera also drove in a run for the Tigers, who improved their league-worst road record to 11-23 and split the two-game series.

''Definitely looking slider,'' Haase said. ''Fortunately for me, I got one in the zone and just something I could handle.''

Added Tigers manager A.J. Hinch: ''I loved how he handled the game behind the plate and also came up big with the homer when we needed it to separate us a little bit and give us a little breathing room.''

Rony Garcia (3-2) won his third consecutive start for Detroit, allowing one run on four hits with four strikeouts in five innings. Gregory Soto pitched a perfect ninth for his 15th save in 17 opportunities.

''It was wonderful,'' Garcia said through a translator. ''It was very, very good. I tried to do the job and fortunately, we were able to win the game today.''

Evan Longoria had a first-inning home run for the Giants, his eighth of the year, but San Francisco couldn't capitalize on late-inning chances to tie the game.

Down 3-1 in the seventh, the Giants loaded the bases with one out. Mike Yastrzemski grounded into a fielder's choice, allowing Tommy La Stella to score and cut the deficit to one. After a walk to Longoria loaded the bases again, Austin Slater struck out on three pitches.

In the eighth, La Stella doubled to left with two outs, but Wilmer Flores grounded out to third to end the inning. Overall, the Giants left nine runners on base.

''These are the days that are just extremely frustrating,'' Wood said. ''I felt really good. I thought it was the best my slider's been in a long time, if not (all) year. So to have that (home run) happen at the end really sucked, to be honest. Just really frustrating.''

Tigers: RHP Michael Pineda (fractured right middle finger) is expected to come off the injured list and start Friday against Kansas City. ''We're not gonna make anything official until likely Friday morning,'' Hinch said. ''He's penciled in. That's about as far as we need to take it.''

The Giants optioned IF/C Yermin Mercedes to Triple-A Sacramento to make room for Wade on the active roster.