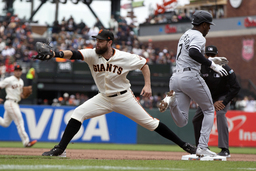 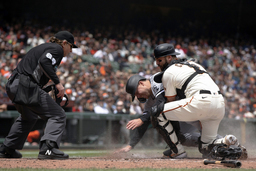 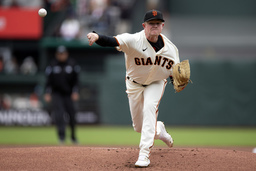 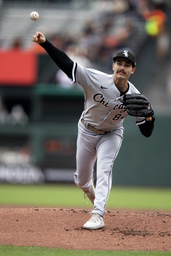 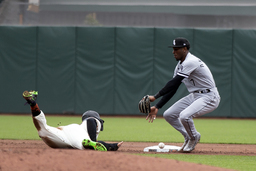 SAN FRANCISCO (AP) Gavin Sheets doubled twice and drove in two runs, and the Chicago White Sox held on for a 5-3 victory against the San Francisco Giants on Saturday.

Dylan Cease allowed one run in five innings for his third consecutive win. The major league leader in strikeouts per nine innings, Cease (7-3) had only four against San Francisco - his fewest since May 24 - and overcame LaMonte Wade Jr.'s home run leading off the first to improve to 4-1 in seven road starts.

''It wasn't my sharpest and I wasn't able to go deep because I didn't execute well, I didn't get ahead, but I kept us in there so it was good enough,'' said Cease, who earlier in the day was named AL Pitcher of the Month for June. ''It definitely could have been worse. Being able to keep us in it, get through five, it's definitely good.''

Tim Anderson added two hits for Chicago. Yoan Moncada and Leury Garcia each drove in runs as the White Sox beat the Giants for the 10th time in 12 games.

''We put the ball in play, guys were aggressive running the bases and then we had a couple big swings by (Sheets),'' White Sox manager Tony La Russa said.

San Francisco scored a run in the ninth and had the tying runners on base with two outs before Graveman got Mike Yastrzemski to ground out.

After Anderson's infield single leading off the fourth, Andrew Vaughn reached on a fielding error by Giants first baseman Brandon Belt. Sheets followed with a double off pitcher Logan Webb that went over the head of left fielder Joc Pederson, who initially broke in on the ball. Moncada followed with an RBI single past a drawn-in infield.

''The second time through we had a better game plan of how we wanted to attack (Webb) and try to get the ball in play,'' Sheets said. ''He's got a ton of sink and a ton of movement so we just had to grind out some at-bats. Once we got that first at-bat off of him, our game plan changed a little bit and it was better.''

Garcia, who delivered the game-winning hit in Friday's 1-0 win, drove in a run with a fielder's choice grounder in the sixth. A second run scored on the play when shortstop Donovan Walton's throw sailed over the head of Webb, who was covering first base.

Webb (7-3) allowed six hits and five runs (three earned) in six innings. He struck out five and walked one.

The Giants have lost nine of 12.

Graveman picked up saves in back-to-back games for the first time this season, but will likely be on the shelf Sunday after pitching in consecutive high leverage situations. Same goes for Banks and Kelly, both of whom pitched on Friday. With closer Liam Hendriks not due back off the injured list until Monday, the White Sox will have to scramble to find someone to close Sunday's game if a save situation comes up. ''We're going to have to win with a different bullpen, which is OK,'' La Russa said.

White Sox: OF Adam Engel (right hamstring strain) continues to do some running and has not suffered any setbacks.

Chicago RHP Lucas Giolito (4-4, 5.19 ERA) faces San Francisco on Sunday for the first time since 2017 when he allowed five runs in 5 1/3 innings. Giolito has one victory in his previous six starts overall. RHP John Brebbia (3-1, 2.70), who has pitched primarily out of the bullpen this season, will make his second start for the Giants.