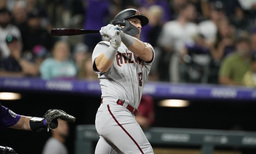 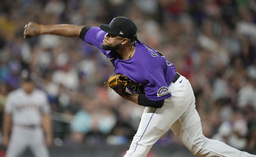 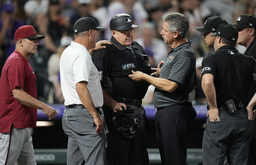 Trainers check on home plate umpire Jerry Layne before he left his position during the sixth inning of a baseball game between the Arizona Diamondbacks and the Colorado Rockies on Saturday, July 2, 2022, in Denver. (AP Photo/David Zalubowski) 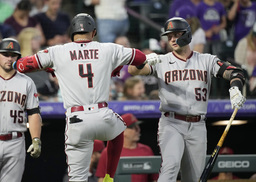 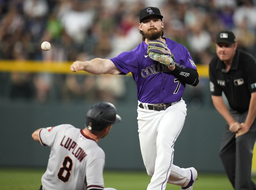 Colorado Rockies second baseman Brendan Rodgers throws over Arizona Diamondbacks' Jordan Luplow after forcing him out at second base on the front end of a double play hit into by Cooper Hummel during the sixth inning of a baseball game Saturday, July 2, 2022, in Denver. (AP Photo/David Zalubowski) 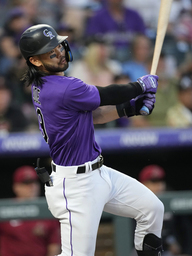 DENVER (AP) Brendan Rodgers homered, Connor Joe had a three-run triple and the Colorado Rockies overcame a two-homer game by Arizona's Christian Walker and beat the Diamondbacks 11-7 on Saturday night.

Kris Bryant had three hits and an RBI, C.J. Cron added a pair of RBI singles and Charlie Blackmon added a two-run double for the Rockies.

Ketel Marte homered, singled and drove in two runs, pinch-hitter Daulton Varsho hit a two-run homer in the ninth inning off Jhoulys Chacin, and Jordan Luplow added a pair of hits and an RBI for the Diamondbacks.

Colorado has won six of its last eight home game and Rodgers has figured prominently in the Rockies' recent surge. He has homered twice in three games and is batting .354 in his last 12 with six doubles, two triples, two home runs and 12 RBIs.

''I feel good,'' Rodgers said. ''I'm really sticking to my zone, trying to get pitches in my zone that I can do damage on. I took good swings tonight, just really minimizing my zone and not missing that pitch.''

Trailing 7-2 going into the top of the sixth inning, the Diamondbacks scored three runs to cut their deficit to two runs. Luplow had an RBI single and Marte homered with two outs, chasing starter Austin Gomber, before Walker connected off reliever Jake Bird for his second homer of the game and 21st of the season.

But the Rockies responded with another four-run inning in their half of the sixth, extending their lead to 11-5. Bryant's third hit of the game drove in the first run, Blackmon followed with a two-run double and Cron hit his second run-scoring single.

Gomber (4-7), making his first start since June 15 after a stint in the bullpen, went 5 2/3 innings and allowed four runs and six hits. ''I felt I pitched better than my line,'' Gomber said. ''We got the win. It was just a couple of mistakes that go over the wall, but other than that I thought I made a lot of good pitches.''

Walker got the Diamondbacks on the board with his first homer, off Gomber, leading off the second. With his fourth career multihomer game, Walker moved into a tie with Austin Riley for third most homers in the NL. His 21 homers this season are the most in a full season for Walker since he hit 29 in 2019.

''I'm just trying to keep it simple and trying not to do too much,'' Walker said. ''It's kind of been the theme of my at bats lately. I'm really just trying to trust myself and let the good stuff shine. The more I can stay out of my own way the more likely that is to happen.''

Home plate umpire Jerry Layne had to leave the game in the bottom of the sixth inning after a foul tip off the bat of Randal Grichuk struck the upper edge of his facemask. Layne left the field under his own power, escorted by Rockies medical personnel for further examination and treatment. The game was delayed for several minutes while Chad Whitson donned protective gear before moving behind the plate. Layne had initially ruled that Grichuk had been hit by the pitch, but replay review determined that the ball nicked the knob of Grichuk's bat before skipping off catcher Carson Kelly's glove and striking Layne's mask.

Rockies: RHP Anotonio Senzatela went on the 15-day injured list Saturday, the day after exiting his start against the Arizona Diamondbacks after two innings due to right shoulder inflammation. RHP Ashton Goudeau was recalled from Triple-A Albuquerque to fill the roster vacancy.

RHP Zac Gallen (4-2, 3.32 ERA) is slated to start Sunday's series finale for the Diamondbacks against Colorado RHP Chad Kuhl (3-5, 3.49 ERA) , who had a complete-game shutout of the Los Angeles Dodgers in his previous start.