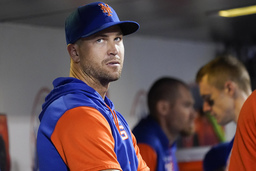 Injured New York Mets pitcher Jason deGrom watches from the dugout during the seventh inning of the team's baseball game against the Washington Nationals, Tuesday, May 31, 2022, in New York. (AP Photo/Mary Altaffer)

NEW YORK (AP) Back in a game at last, Jacob deGrom was sharp.

The New York Mets ace struck out five of the six batters he faced and threw 18 of 24 pitches for strikes Sunday night in his first minor league rehabilitation start for Class A St. Lucie.

The only hiccup for deGrom against the Jupiter Hammerheads in Port St. Lucie, Florida, came when he hit a batter with a pitch.

It was the first competitive outing since spring training for deGrom, sidelined all season because of a stress reaction in his right scapula that caused inflammation. The two-time Cy Young Award winner also missed the second half of last season with right forearm tightness and a sprained elbow - he hasn't pitched in the majors since July 7, 2021.

As he builds up arm strength and stamina, the 34-year-old right-hander will need several minor league rehab outings before he's ready to rejoin New York's rotation.

So the likelihood is deGrom won't be back in the big leagues until at least late July, after the All-Star break.

Fellow ace Max Scherzer (5-1, 2.54 ERA) is scheduled to return from a strained left oblique muscle and start for the Mets on Tuesday night at Cincinnati. Scherzer, a three-time Cy Young Award winner, got hurt May 18 against St. Louis and recently made two rehab starts for Double-A Binghamton.