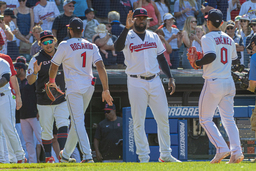 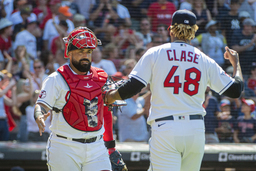 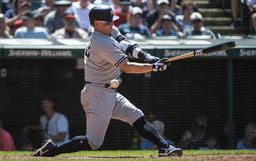 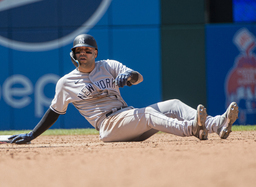 New York Yankees' Marwin Gonzalez reacts after stealing second base against the Cleveland Guardians during the sixth inning of a baseball game in Cleveland, Sunday, July 3, 2022. (AP Photo/Phil Long) 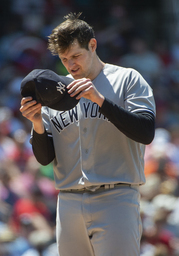 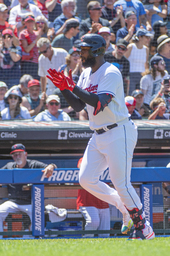 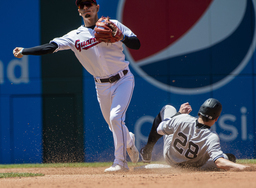 Cleveland Guardians' Andres Gimenez gets a force out on New York Yankees' Josh Donaldson but can't make the throw to first in time to complete a double play during the fourth inning of a baseball game in Cleveland, Sunday, July 3, 2022. (AP Photo/Phil Long) 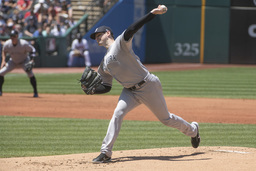 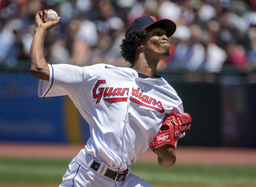 CLEVELAND (AP) About the same time New York Yankees star Aaron Judge grabbed a helmet and bat to pinch-hit, the Guardians committed a ninth-inning error that threatened to sabotage a great win.

In the moment, manager Terry Francona's emotions nearly got the best of him.

''When the ball came out of his glove, I almost started crying,'' Francona said.

Cleveland pulled it together.

Triston McKenzie shut down New York's big-bashing lineup over seven superb innings in a combined one-hitter and closer Emmanuel Clase survived a harrowing ninth, giving the Guardians a 2-0 win over the Yankees on Sunday.

Franmil Reyes drove in both Cleveland runs - homering in the fourth and hitting a clutch RBI single in the eighth - as the Guardians salvaged the series finale and handed the Yankees just their seventh loss in 32 games.

McKenzie (5-6) allowed only a broken-bat single to Josh Donaldson in the fourth. The right-hander, who has been hurt by giving up home runs this season, kept the ball in the park and the Yankees off balance.

''I don't think any of us came into this game looking at the Yankees as the No. 1 team in baseball,'' McKenzie said. ''We came out here looking at them as a team we have to beat.''

Eli Morgan worked a 1-2-3 in the eighth before giving way to Clase, the AL's top reliever in June, for a ninth that had a little of everything.

Clase walked Anthony Rizzo leading off and got Giancarlo Stanton to hit a slow grounder that should have been an out, but first baseman Owen Miller dropped the throw. The right-hander retired the next two before the Yankees summoned Judge, who leads the majors with 29 homers but wasn't in the starting lineup.

''He looked like he was swinging four bats over there in the dugout,'' Francona cracked.

With the crowd at Progressive Field hanging on every pitch, Clase went to a full count before walking Judge to load the bases. He then retired Aaron Hicks on a grounder to second for the final out and his 19th save in 21 chances.

But McKenzie, who had given up multiple homers in six of his previous eight outings, came through with a stellar start.

''I think the difference between this outing and the last couple outings was making them feel a little more uncomfortable at the plate and using all my pitches to both sides,'' McKenzie said. ''I used my curveball well to kind of slow them down and I think that just helped keep guys off balance and helped keep my heater kind of useful from the first inning to the last inning.''

Reyes homered leading off the fourth inning against Jordan Montgomery (3-2), who pitched well but didn't get the run support, an unusual occurrence for a Yankees team winning at a record pace.

Reyes, who recently returned after missing 23 games with a strained hamstring, put the Guardians up 1-0 in the fourth with his sixth homer. Reyes turned on a 1-1 curveball, sending it over the wall in left field.

Judge didn't connect during the series in Cleveland. Earlier this week, he joined Babe Ruth (32), Roger Maris (30) and Mickey Mantle (29) as the only players to homer 29 times in the team's first 76 games.

Guardians star third baseman Jose Ramirez also got the day off. He's been dealing with a sore thumb ligament and went 1 for 7 with four strikeouts Saturday.

''I just thought he was tired,'' Francona said. ''I know as hard as it is to not have him in the lineup, if you go too far and find out the hard way like you lose the guy for a week or two. I just thought he really could use a break.''

The Guardians re-claimed outfielder Oscar Mercado off waivers from Philadelphia during the game. Mercado was designated for assignment by Cleveland on June 21 and claimed by the Phillies six days later. He had one at-bat before being designated on July 1.

Yankees: RHP Domingo German (shoulder impingement) allowed one run and two hits over four innings in his his third rehab start, for Double-A Somerset at Reading on Sunday, as he works toward an expected return later this month. He threw 39 of 49 pitches for strikes. ... Boone received good reports on RHP Jonathan Loaisiga (shoulder inflammation) after he threw batting practice in Tampa, Florida. Loaisiga is scheduled to have another session Tuesday.

Guardians: C Austin Hedges (concussion) remains sidelined. He took batting practice between games on Saturday, but has not yet been cleared to return.

Guardians: Play yet another doubleheader, their seventh and third in six days, at Detroit on Monday. Zach Plesac (2-5, 3.86) will start the opener against rookie Garret Hill, making his major league debut. LHP Konnor Pilkington (1-1, 4.31) starts the second game against RHP Alex Faedo (1-4, 4.84).