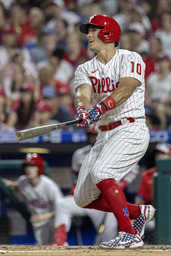 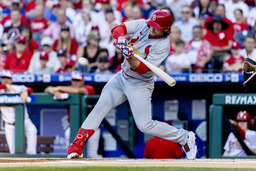 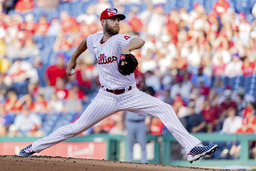 The Phillies won two of three games in the series against a team they are chasing for a National League wild-card spot.

''A series win is always a plus,'' Wheeler said. ''Hopefully, we can continue this and keep it up.''

Since Rob Thomson took over as interim manager following the firing of Joe Girardi on June 3, Philadelphia has gone 20-9 and moved within 1 1/2 games of the Cardinals for the NL's third wild card. The teams will meet next weekend in St. Louis for a four-game series.

''We haven't played a lot of the Central, but to come away with a series win now and a series win over the Brewers (in early June in Milwaukee) is a good measuring stick of where we are against the National League.,'' Hoskins said. ''It's big. We see them again in a week and it will be another big test for us. So we'll see where it goes.''

Wheeler didn't allow more than one Cardinals baserunner to reach in an inning, scattered four singles through seven innings while striking out five and walking one in improving to 7-4 with a 2.66 ERA. It is the third time this season that Wheeler has been a part of a combined shutout, which was finished off by relievers Nick Nelson and Corey Knebel.

Wheele's effort followed back-to-back nights in which the Phillies were forced to use three key arms at the back end of the bullpen - Siranthony Dominiquez, Brad Hand and Andrew Bellatti. None of them were available for the Phillies on Sunday, forcing Wheeler to go more economic after racking up 60 pitches in the first three innings.

''I knew as the pitch count went up that I was going to have to get contact,'' Wheeler said. ''I thought that after those early innings, we did that and the defense behind me played well.''

Cardinals manager Oliver Marmol said: ''He was just overpowering with his stuff.''

Hoskins continued his torrid stretch since June 8. In the last 25 games, the first baseman has a .341 average with nine homers, 17 RBIs, and 18 runs scored. That includes four homers in his last five games after breaking the scoring ice in the bottom of the fourth with a solo homer on a cutter by Adam Wainwright that hung over the middle of the plate.

In his career against Wainwright, Hoskins is now 6 for 10 (.600) with three homers and three RBIs.

''Everybody has those guys who they see well,'' Hoskins said. ''He does a great job of mixing pitches. But yeah, I see him well.''

In the sixth, Hoskins doubled off the center-field wall to start the inning and scored on a Nick Castellanos single up the middle. Two hitters later, Realmuto plated Castellanos with his sixth homer of the season.

Both Hoskins and Realmuto went 2 for 4 - the only hitters for either team with multiple hits. Both are seen as critical offensive pieces if Philadelphia is going to weather the storm caused by Bryce Harper's broken thumb for the next six-plus week.

''We've talked about how you can't replace a player of his caliber,'' Hoskins said. ''You shouldn't really try, there's a few of them in the whole world. But you have to be focused on being the best that you can and we have some good players in here. We're better when he's in the lineup, but we have a lot of good hitters around here.''

Wainwright (6-6) allowed four runs on eight hits in 5 2/3 innings, striking out five and walking one.

''I didn't think he was wearing down,'' Marmol said. ''His cutter didn't play today, so he was pitching off the sinker. He used his fastball accordingly with a couple change-ups. Usually, the cutter makes an effective weapon. But he battled through that.''

The Phillies placed LHP Ranger Suarez on the 15-day injured list on Sunday because of lower back spasms. Suarez, who had a 6-5 record with a 4.33 ERA in 15 starts this year for the Phillies, was scheduled to make the start on Tuesday against the Washington Nationals.

It is the second Phillies starting pitcher within a week to head to the injured list. RHP Zach Eflin was placed on the injured list on June 26 with a right knee bruise that could keep him out until after the All-Star break. Bailey Falter is replacing Eflin's turn in the rotation.

After Sunday's game, Thomson confirmed that Cristopher Sanchez, who has started two games in the past two years for the Phillies, will get the ball on Tuesday night. Sanchez was scratched Sunday night for Triple-A Lehigh Valley to make the start for Philadelphia.

Cardinals: OF Harrison Bader, who is on the 10-day injured list with plantar fasciitis in his right foot, is expected to begin throwing and hitting on Monday. OF Tyler O'Neill, who has been out for 12 games with a left hamstring strain, is expected at Triple-A Memphis as part of his rehab assignment.

Phillies: SS Didi Gregorius had an injection in his left knee and sat for his second straight game on Sunday night. Phillies interim manager Rob Thomson said that the club would have a better indication of Gregorius' availability on Tuesday, when the club returns from its day off. Gregorius missed a month because of a left knee sprain in May.

Phillies: In a scheduling quirk, the Phillies will have a scheduled off day on the 4th of July for the first time since 1916. The only previous times the club has not played on the holiday since were 1981 during the two-month players strike and the 2020 pandemic-shortened season, which didn't begin until July 24. They will host Washington on Tuesday.