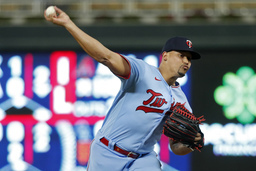 NEW YORK (AP) Higher velocity and increased shifts led to the major league batting average dropping to .243, its lowest since 1968.

When the average dropped this low more than a half-century ago, MLB lowered the pitcher's mound. Next year's rules changes announced last month include the first restriction on shifts, a decision made over the objection of the players' association.

''We've engaged in a process to develop rules that will bring back the best form of baseball,'' Commissioner Rob Manfred said at the time.

Batting average for left-handed hitters was .236 this year, down from .254 in 2016, when lefties were one point below the big league average.

Luis Arraez's .316 average for Minnesota was the lowest by an American League batting champion since Boston's Carl Yastrzemski hit .301 in 1968.

''Every time that bullpen door swings open, it's velocity,'' Atlanta manager Brian Snitker said. ''The guys, they weren't like that. The closers weren't throwing like they are now. But it's kind of the way they are growing up and now they are trained - and amazing to me, the number of them, too. It's like they just keep coming.''

''The way the game is now, everybody's throwing that hard. It's not fun to face, but it's just how the game is,'' Seattle's Ty France said. ''To be able to step in the box on this stage, it was pretty cool.''