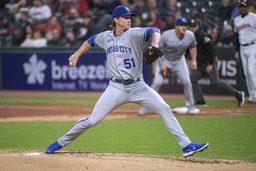 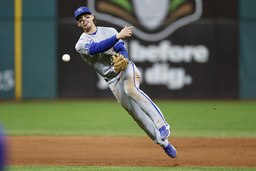 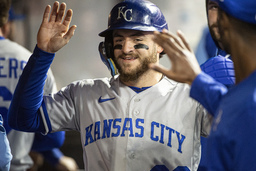 Kansas City Royals' Kyle Isbel is congratulated in the dugout after scoring on a double by MJ Melendez during the fourth inning of a baseball game against the Cleveland Guardians in Cleveland, Saturday, Oct. 1, 2022. Isbel drove in two runs earlier in the inning. (AP Photo/Phil Long) 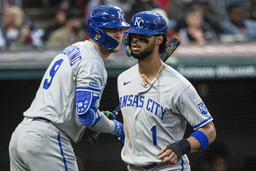 Kansas City Royals' MJ Melendez scores on a RBI single by Salvador Perez and is greeted at home plate by Vinnie Pasquantino during the third inning of a baseball game in Cleveland, Saturday, Oct. 1, 2022. (AP Photo/Phil Long)

Now, the pressure is on Picollo to chart a new course for the franchise.

''When you make a decision like this, we're looking forward to the future,'' Picollo said Thursday, one day after letting Matheny and Eldred go. ''We are looking to what's next, who we can put around our players that is innovative and exciting.''

The Royals were anything but exciting this season.

Sure, there were bright spots in AL Rookie of the Year candidate Bobby Witt Jr., breakout ace Brady Singer and a wave of talented young players who made big league debuts. But it wasn't enough to energize an increasingly frustrated fan base that watched the Royals finish off a 65-97 season with a lackluster 9-2 loss in Cleveland.

Picollo's decision to fire Matheny and Eldred upon the club's return to Kansas City was expected, especially given John Sherman's promise last month that changes were coming to the organization he purchased three years ago.

''Mike understood where we were,'' said Picollo, who took over the baseball operations department when Sherman fired longtime executive Dayton Moore last month. ''I'm going to try to avoid the word `expectations' as much as I can, but we did have some expectations, and when you look at our record at the end of the season, something went wrong. We didn't win as many games as we should have.''

Picollo did not provide a timetable for hiring a new manager, though he promised to cast a wide net in the search. And while he also did not mention specific candidates, Picollo did describe the type of leader he wants for an organization that has relied on decidedly old-school managers in Ned Yost and Matheny for more than a decade: creative, data-driven and focused on utilizing everything from performance science to cutting-edge behavioral analysis.

''I do think the managerial position has changed,'' Picollo said. ''You talk to players around the league, executives - there are things teams are doing that are pretty advanced. Our goal is to find out what those things are and implement them here.''

Picollo said bench coach Pedro Grifol and third base coach Vance Wilson will be considered for the job. He also said the hitting department led by Alec Zumwalt, assistant hitting coach Keoni De Renne and special assignment coach Mike Tosar would remain largely intact, regardless of whom the Royals hire to manage the club.

As for a new pitching coach, Picollo plans to give his new skipper some influence in the decision.

''We have work to do,'' Picollo said, ''but we do have a good core. I'd think there's a pitching coach and manager out there that would be excited to see what our staff and what our roster will look like.''

Witt hit .254 with 20 homers and 80 RBIs while stealing 30 bases. Rookie catcher MJ Melendez struggled with contact but hit 18 homers when he did. Vinnie Pasquantino may have been the biggest surprise if only because so little was expected of the rookie first baseman, who merely hit .295 with 10 homers and 26 RBIs in 72 games.

Singer and Scott Barlow were the class of the pitching staff all season. Singer went 10-5 with a 3.23 ERA after overcoming some early troubles with a trip to the minors, while Barlow was 7-4 with a 2.18 ERA and 24 saves in 69 appearances.

Hunter Dozier still has two years and more than $16 million left on his four-year contract, though his future as an everyday player is bleak after hitting just .236 in 128 games. The Royals have too many young players with upside - Kyle Isbel, Nate Eaton and Drew Waters among them - to waste a lineup spot on a career .240 hitter.

HELP ON THE WAY

The Royals could have more young talent on the way next season. Former first-round pick Nick Loftin and fellow outfielder Tyler Gentry could arrive at some point, while left-hander Asa Lacy - another former first-rounder - and pitchers Jonathan Bowlan and Alec Marsh are reaching make-or-break points in their development.