Last-place A's miss the playoffs for a second straight year 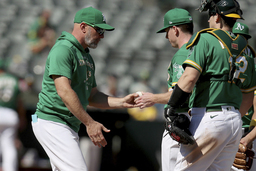 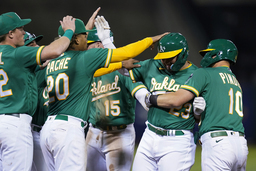 Oakland Athletics' Shea Langeliers (23) is mobbed by teammates after earning a walk with the bases loaded against the Los Angeles Angels during the 10th inning of a baseball game in Oakland, Calif., Tuesday, Oct. 4, 2022. The Athletics won 2-1 when Tony Kemp scored. (AP Photo/Godofredo A. Vsquez) 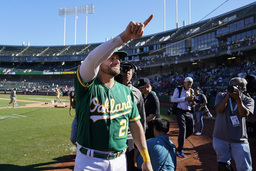 Oakland Athletics' Stephen Vogt exits the field after the team's 3-2 victory over the Los Angeles Angels in a baseball game in Oakland, Calif., Wednesday, Oct. 5, 2022. (AP Photo/Godofredo A. Vsquez) 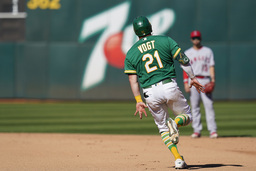 Oakland Athletics' Stephen Vogt runs the bases after hitting a solo home run against the Los Angeles Angels during the seventh inning of a baseball game in Oakland, Calif., Wednesday, Oct. 5, 2022. (AP Photo/Godofredo A. Vsquez) 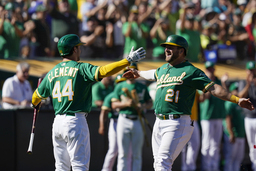 Oakland Athletics' Stephen Vogt (21) celebrates with Ernie Clement (44) after hitting a solo home run against the Los Angeles Angels during the seventh inning of a baseball game in Oakland, Calif., Wednesday, Oct. 5, 2022. (AP Photo/Godofredo A. Vsquez) 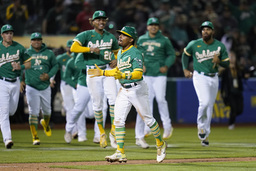 Oakland Athletics' Tony Kemp, center, scores from third on a bases-loaded walk issued to Shea Langeliers by the Los Angeles Angels during the 10th inning of a baseball game in Oakland, Calif., Tuesday, Oct. 4, 2022. The Athletics won 2-1. (AP Photo/Godofredo A. Vsquez)

OAKLAND, Calif. (AP) Mark Kotsay made a point to stay the course with a positive spirit in his first season managing the Oakland Athletics, setting an example for his young club by keeping his cool even as the losses piled up month after month.

Those former A's stars regularly came through the Coliseum with the visiting team and provided a reminder of what this low-budget club used to be. With so many cost-cutting moves, the offense lacked punch and the pitching staff missed continuity.

Yet Kotsay praised Oakland's players for continuing to play with energy and effort until the very end, making things difficult on the playoff-bound Mariners in late September and sweeping the Angels to end the year on a four-game winning streak that matched the best all season.

''We always celebrate. My biggest thing is celebrate every one, I don't care, they're hard to get,'' Kotsay said. ''It doesn't matter if it's the 54th one, you celebrate it like it's the first one.''

The A's finished 60-102 and missed the playoffs for a second straight year following three consecutive berths and an AL West title during the coronavirus-shortened 2020 season. They had 26 fewer wins than the 2021 team that finished 86-76, nine games behind the division champion Astros.

''This game can eat you up if you let it,'' Kotsay said. ''You have to have a mindset that each day presents a new opportunity, so I think that's the mindset. And the growth, seeing this, even if it's small, even if it's not noticeable or glaring, there are things that this club has done this year individually, collectively that we've grown.''

Tony Kemp bounced back from a slow start with the bat to produce regularly down the stretch, a big bright spot for Oakland's offense in the second half.

After batting .203 with two home runs in the first half, the second baseman and left fielder wound up finishing with a .235 average, seven homers and 46 RBIs.

Kemp spoke up to his teammates down the stretch to make sure they continued to fight and gain valuable experience even if the A's were out of the race months ago.

''The biggest thing we can do is just have fun,'' he said. ''Don't worry about the result or outcome. Just trust the process.''

The A's managed just 137 home runs, ranking 27th in baseball, and down from 199 last year. While Seth Brown (25) and Sean Murphy (18) established career bests, they certainly missed all their departed sluggers.

Chad Pinder hit 12 home runs and is expected to leave in free agency.

''You look at the guys that are on different teams that were here and part of a nucleus that won ... it does show that this organization can develop players and it's a matter of us now focusing on that same path,'' Kotsay said.

Center fielder Ramon Laureano was lost for the season after going on the 10-day injured list Sept. 17 with a right hamstring strain. He already missed time from Aug. 15-Sept. 5 with a strained left oblique muscle after completing the final 27 games of an 80-game suspension he received last August.

He was limited to 94 games after playing only 88 in 2021, when he was penalized for testing positive for a banned substance.

He expects to be back in about 16 months, a shorter recovery from his first operation in 2017 when he had the ulnar collateral ligament reconstruction.

Even as players went down, Kotsay appreciated the A's ''continuing to do things to improve this ballclub.''

Veteran catcher Stephen Vogt retired after 10 major league seasons and hopes to manage as soon as he can make an immediate move into managing or coaching.

He hit a home run in his final at-bat, no less, to which he said, ''Today was a dream come true and something I wouldn't have drawn up in my dreams.''

Kotsy appreciated having Vogt's voice in the clubhouse to keep everyone together or to lead the hard conversations.

''If I'm in postgame media and I don't have a player like him in that room addressing it, it may never get addressed and it may continue,'' Kotsay said. ''It may linger, and that's not something you want to happen.''