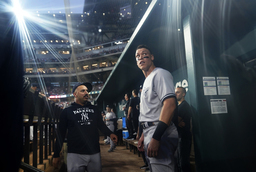 New York Yankees' Aaron Judge stands in the dugout after his solo home run during the first inning in the second baseball game of the team's doubleheader against the Texas Rangers in Arlington, Texas, Tuesday, Oct. 4, 2022. With the home run, Judge set the AL record for home runs in a season at 62, passing Roger Maris. (AP Photo/LM Otero)

NEW YORK (AP) Fans have watched more than 11.5 billion minutes of game action on MLB.TV during the regular season, a record for the streaming package and a 9.8% increase over last year.

The five most-watched games on the 20-year-old streaming platform came this season, including the Red Sox-Yankees opener on April 8.

Overall, nine of the 10 most-watched days and games were from this season. Last year, more than 10.5 billion minutes were viewed, marking the first time MLB.TV passed the 10 billion-minute milestone.

Major League Baseball also said in a release that companion programming saw an 84% increase. This was also the first season MLB had a pair of streaming network packages with a Friday night doubleheader on Apple TV+ and Sunday afternoon games on Peacock.