Plesac in Cleveland's bullpen for wild-card round with Rays 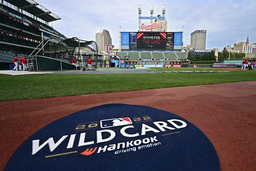 CLEVELAND (AP) Guardians starter Zach Plesac will pitch out of Cleveland's bullpen in the wild-card round against the Tampa Bay Rays.

Plesac, who recently returned from the injured list due to a broken hand, made the 26-man roster ahead of rookie Cody Morris.

Manager Terry Francona said the decision to keep Plesac over Morris came down to experience.

''We went back and forth a ton,'' Francona said Friday. ''Just decided in the end a little bit more veteran, a little bit more experience, and especially in a game, or could potentially be a game where, say, it's extra innings, having a guy that holds runners, fields his position, probably gave it the edge.''

Plesac made his first relief appearance in the majors on Oct. 4 against Kansas City.

Also, Cleveland starter Aaron Civale is not on the wild-card roster because it's a short series. The right-hander will start Game 1 of the AL Division Series in the Guardians advance.

There were no surprises on Tampa Bay's roster. Manager Kevin Cash stuck with the group that clinched a wild-card berth and made the postseason for the fourth straight year.

Rays reliever Javy Guerra, who converted from shortstop to pitcher while in the minors in 2019, will be in Tampa's bullpen. Guerra went 2-1 with a 3.21 ERA in 15 appearances this season.

Cash did not comment about his decisions because his news conference was held before the rosters were officially released.