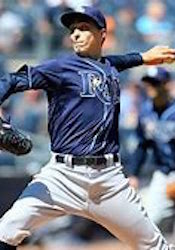 With the All-Star break creating a limited schedule, we had no two-start pitchers in Week 16. Week 17 brings a return to normalcy with several pitchers set to take the mound twice. It’s an interesting mix of big-name stars and under the radar options, as well. Let’s dive into the matchups and discuss whether or not some deserve to be in your fantasy starting lineup.

In something you don’t normally see from a reigning Cy Young winner, Snell has allowed at least five runs in a start five times already this season. While he’s definitely had some very strong outings mixed in there as well, those poor performances have left him with a 4.70 ERA. His FIP is much better at 3.44 and he’s been a bit unlucky with opponents posting a .351 BABIP against him, so there is some room for improvement in the second half. He’ll begin things with a tough start against the Yankees at Yankee Stadium. The last time he faced them there, he allowed six runs and recorded only one out. There is plenty of risk involved with starting him, but it’s hard to pass up on a pitcher with a 32.8 percent strikeout rate for a two-start week, so rolling the dice and starting him might be the best way to go.

Giolito has provided the White Sox with a much need boost for their starting rotation, posting a 3.15 ERA that is backed by a 3.20 FIP. Despite having shown strikeout upside in the minors, he only produced a 16.1 percent strikeout rate in his first full season in the majors last year. That has been his biggest area of improvement this year with his staggering 30.1 percent strikeout rate. He’s already made four starts against the Royals, allowing five runs and recording 34 strikeouts across 25 innings. Their fifth meeting could get his week off to a blazing start. His second outing against the Rays is also encouraging since they have struck out the fifth-most times (860) in baseball. Start Giolito with confidence.

Few pitchers have put forth as surprising of a campaign as Lynn has so far. Not only has he improved his ERA by a full run from last year to 3.69, but his FIP has been even better at 2.86. His strikeout rate has jumped up to 26.4 percent, but maybe the key reason for his success has his improved command. He has a 5.5 percent walk rate after recording at least a 10.1 percent walk rate in back-to-back seasons. These are not the easiest of matchups, which might cause some people to pause before adding him to their lineup. However, he allowed one run and recorded nine strikeouts across six innings against the Diamondbacks earlier this season. He’s also already made two starts against the Astros already, allowing three runs and recording 19 strikeouts over 14 innings. Keeping him in there could be a risk that’s well worth taking.

Peacock has been on the IL since the end of June with a shoulder injury, but he’s expected to return to the rotation for Monday’s outing against the Angels, setting him up for a two-start week right off the bat. Considering how poorly Framber Valdez and Jose Urquidy have pitched, they have to be excited to get Peacock back on the mound. He’s done an admirable job in his return to the rotation this year, recording a 4.15 FIP and a 1.15 WHIP to go along with a 25.3 percent strikeout rate. However, I want no part of him this week based on these two matchups. The Angels are in the top-10 in the league in OPS while the Rangers have plenty of dangerous left-handed hitters, which is a problem considering Peacock has allowed a .376 wOBA against lefties this year.

If you’re looking for a streaming option, taking a chance on the Cease might be the way to go. One of the jewels of the White Sox farm system, Cease had a 3.79 FIP at Triple-A before being called up. His control issues are a concern, but it is encouraging that he hasn’t allowed more than 0.6 HR/9 during any of his stops in the minors. The Tigers did get to him for three runs in his debut, although he showed his strikeout upside with six of them across five innings. With the Rays propensity for striking out already having been discussed and the Royals ranking in the bottom third of the league in runs scored, there is some appeal here in deeper leagues.