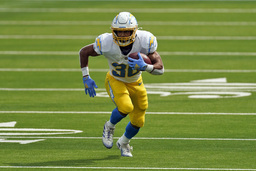 Los Angeles Chargers running back Austin Ekeler runs for a touchdown against the Carolina Panthers during the first half of an NFL football game Sunday, Sept. 27, 2020, in Inglewood, Calif. (AP Photo/Ashley Landis)

Ekeler was injured during the first quarter of Sunday's game against Tampa Bay. He led the AFC with 378 scrimmage yards after the first three games.

Justin Jackson and Joshua Kelley are expected to be the main running backs in Ekeler's absence. Kelley leads the team in carries (52) but has fumbled in two straight games. Jackson missed the first three games with a calf injury but saw limited action last week.